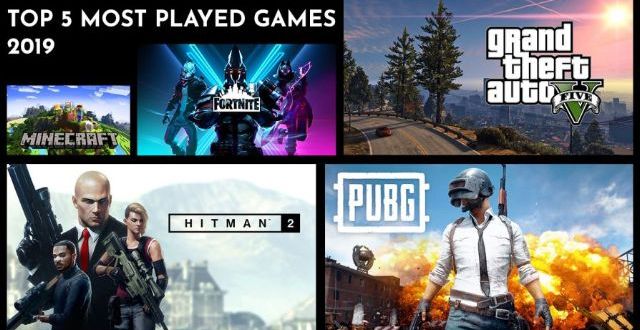 Here, we will discuss the Top 5 most played games in 2019. we discuss all category games like action, shooting, multiplayer battle royals, fighting games, and others.

Online multiplayer games like Fortnite and PUBG have recently discovered the whole world and some games published years ago but still popular today we discuss all those games below.this is the first games of 2019.

Fortnite is the most popular game of 2019played today.according to twinfinite.net Fortnite played 8.3 million players. this game is a first-person shooting game developed by Epic games first was the game released as a paid-for Microsoft Windows,macOS, Xbox One and PS4 on the date of 25th June 2017.

In 2018 it was without any doubt game of the year according to Epic games.it was a break all the records across multiple platforms in 2019 it was the first rank on shooting games.

Thank you for the create this battle game and there’s always update new things coming into Fortnite that’s why gamers more like this game in 2019.

PUBG is a most lovable game today every gamer likes this game.PUBG stands for PlayerUnknown’s Battlegrounds this game was started in 2018. this game is a multiplayer online battle game is developed by PUBG corporation.

The game begins with easy chicken dinner but as you combat your way it is a higher group, it comes more challenging and it’s hard to win the game.all over gameplay and players experience is that makes it easier to play.

Minecraft is an independent video game developed by Swedish Markus and after published by the Swedish company Mojang. the innovative aspects of Minecraft allow to players to developed cubes in a 3D procedurally produce word.and other that action in the game added resources, crafting and action. this game has multiple game modes are available.

Minecraft was published on 17th of May 2009. and Minecraft is still the most played game in 2019 with nearly 75 million players.

Hitman 2 is a single-player game after the month of its release 359,772 players played. This game was Launch 13 November 2018. Hitman 2 isn’t that different from the first Hitman 1 but yes, few minor differences are there and it was good.

In this game, players can control Agent 47 it working with the International Contract Agency and he travels to different locations all over the world to find the high-profile criminal.

Hitman 2 is a popular game today.